“You should be able to look wildlife sculpture in the eye and see life.” (Hamish Mackie)

British wildlife sculptor Hamish Mackie has had the privilege of observing wildlife in many corners of the world at first hand. “Observing animals in their own environment, in their natural habitat, is essential to understanding the subject’s physical and instinctive traits. For example, the disposition of a captive predator is very different from that of a predator in the wild,” he says. This close observation, often involving intense research trips and sculpting from life in the field, informs Hamish’s whole approach to his work, which resonates with his passion for the natural world.

His bronze sculptures capture instinctive moments of animal behaviour but are his own interpretation, not merely photographic representations. Hamish manages to convey the inner core, strength and grace of his subject. Largely self-taught, his style is unique – he frequently works in spontaneous, often unrepeatable, fluid gestures with a confidence born from many years of mastering his craft. This assertive handling of his materials, coupled with an acute understanding of anatomy, results in strong, dynamic, ‘living’ sculptures. 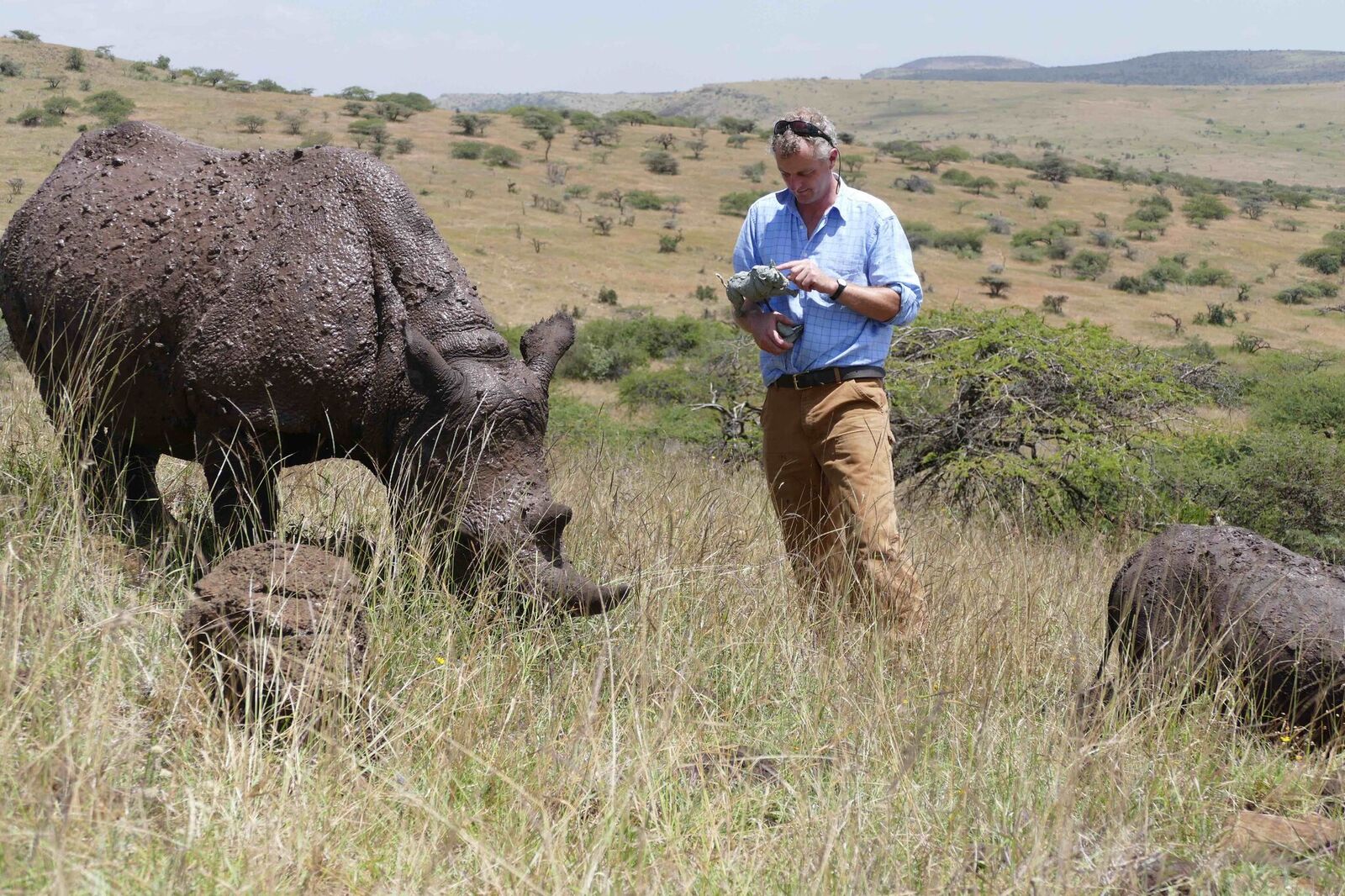 “It is close observation of my subject’s behaviour that really brings my pieces to life. I want to convey a sense of character, their spirit. This determines how I handle my material – in a loose fluid manner or in a tighter, more controlled way; with large sweeping strokes, or with smaller detail. A sculpture should have its own power. I want the viewer to feel an emotional response.” (Hamish Mackie)

Born in 1973, Hamish Mackie grew up on a livestock farm in Cornwall, England. In the kitchen of the family farm, there still hangs his first bronze sculpture – a calf’s head he made at the age of 12 as a Christmas present for his father. He attended Radley College and Falmouth School of Art, before going on to study design at Kingston University. He began sculpting full time in 1996.

Hamish has works in public and private collections around the world. His sculptures are cast in bronze, silver or occasionally gold as limited editions, each signed, dated and numbered. Each sculpture takes on average four months to be sculpted, moulded and then cast into bronze using the lost wax method. It is a highly-skilled, labour-intensive process. 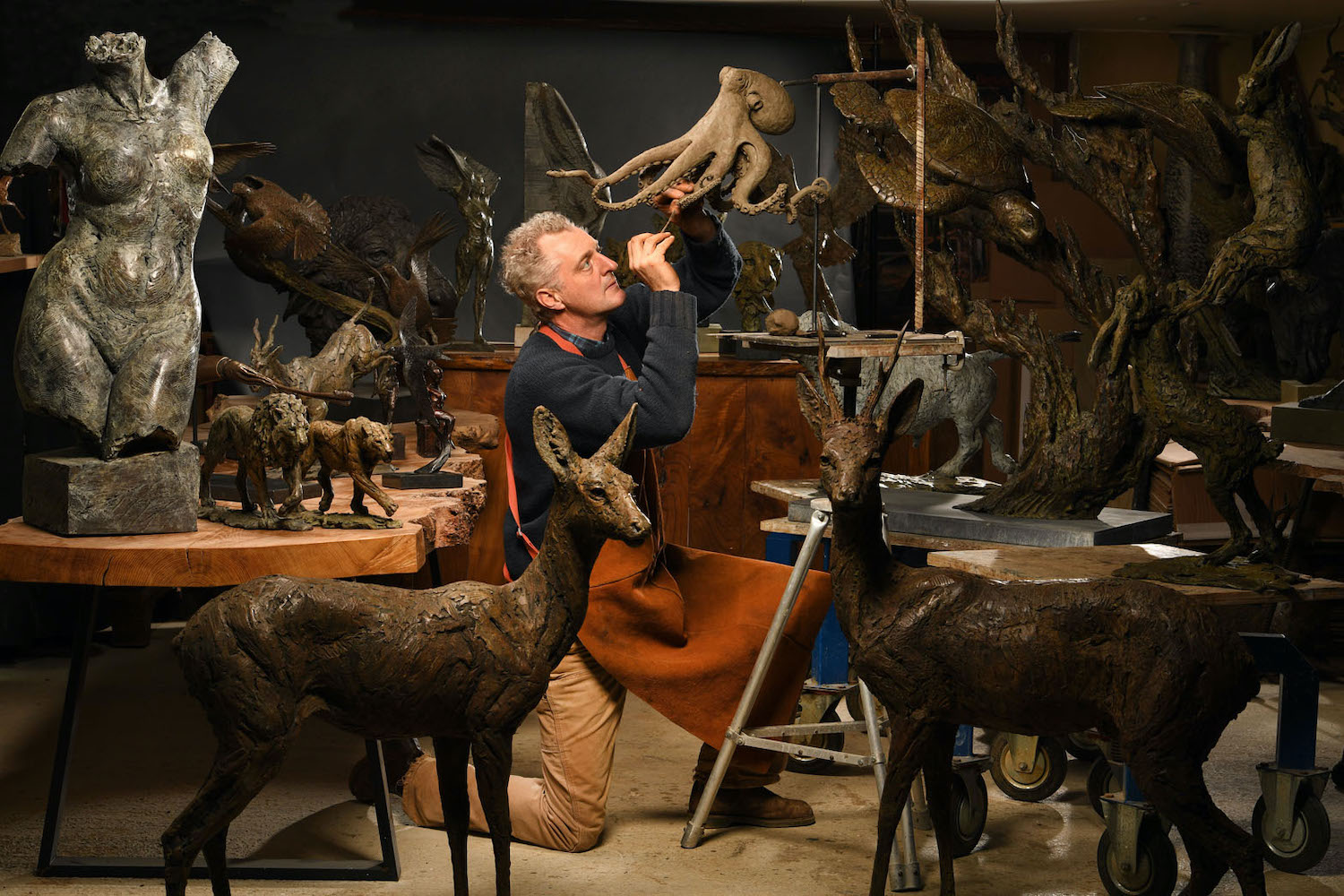 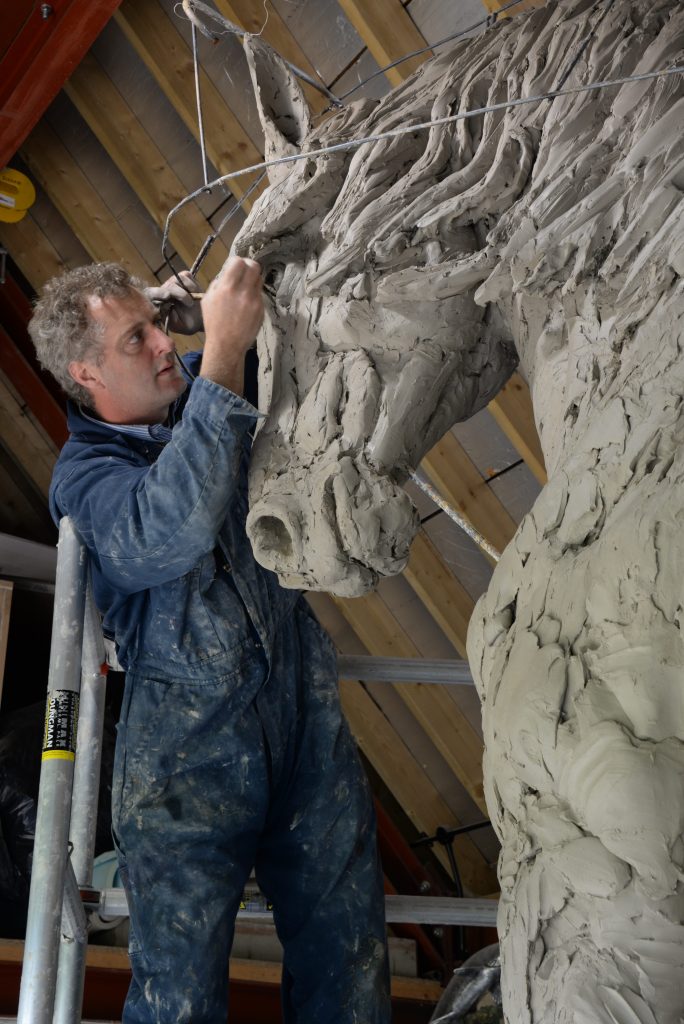 In 2007, Hamish built a sculpture studio in Oxfordshire, where he now lives and works with his wife Laura and their three daughters. He has travelled to Antarctica, the Falkland Islands, South Georgia, Africa, United Arab Emirates, Australia and India, as well as all over Europe, to study wildlife. You can read about his travels in the News section.

In 2014, Hamish Mackie won a major public art commission – Goodman’s Fields Horses for the Berkeley Homes Goodman’s Fields development in the City of London – six life and quarter size horses running loose through the pedestrianised plaza. During this year-long project, he collaborated with Lockbund Foundry to create a new bronze foundry big enough for the job that required over a kilometre of steel for the armatures, six tonnes of clay, one tonne of silicone rubber and four tonnes of bronze. The sculptures were unveiled in 2015 to critical acclaim and the following year, won the Public Monuments and Sculptures Association’s Marsh Award for Excellence in Public Fountains.

In 2016, Hamish also presented his sixth Solo Show, Life in Bronze, at Mall Galleries, London to great critical acclaim. You can download a catalogue of his work below. 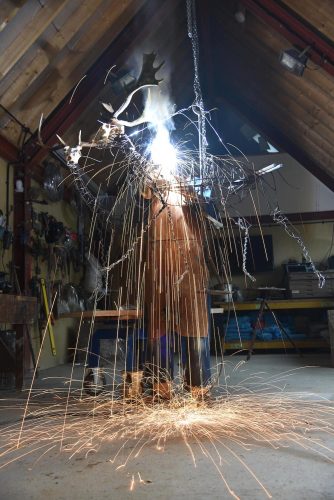 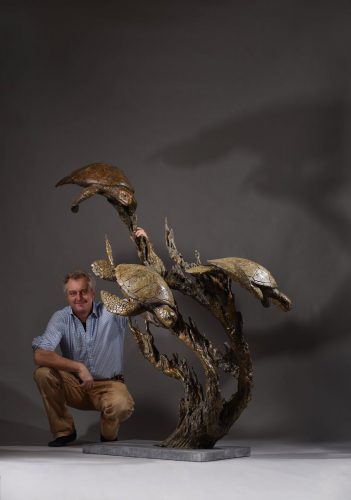 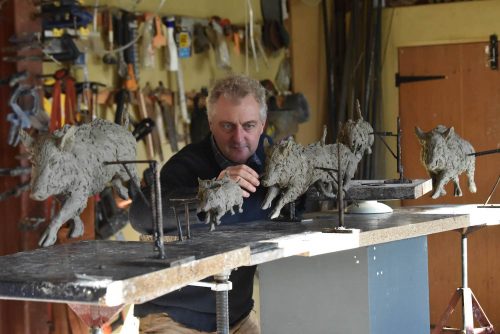 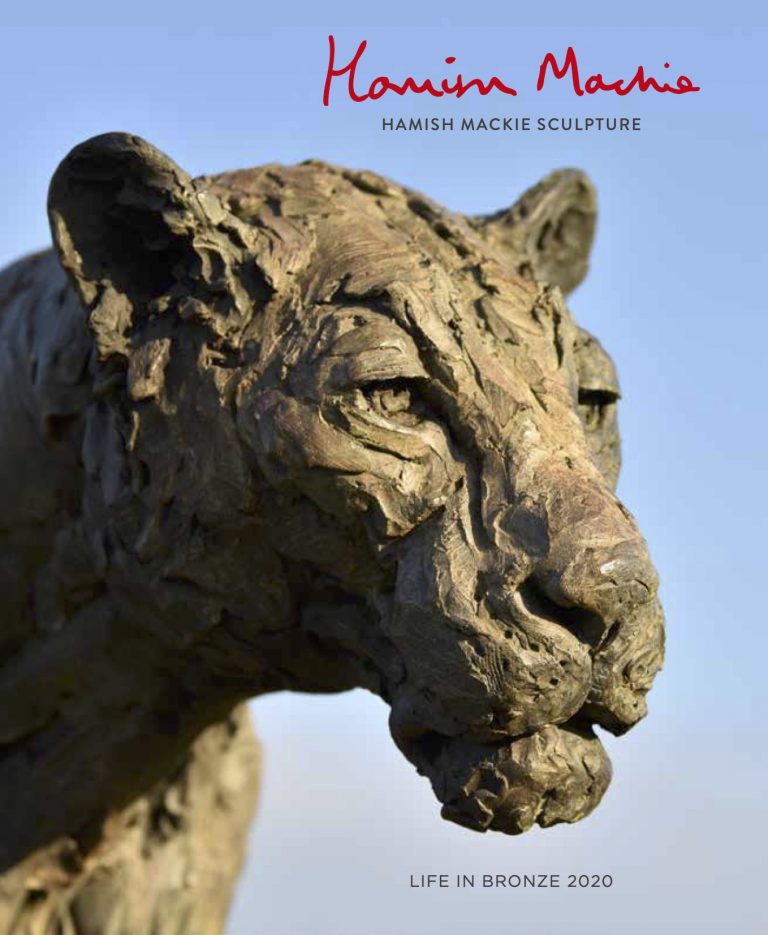 A catalogue of new work and accompanying price list is available.

If you would like to contact Hamish to discuss a commission for a silver or bronze sculpture or to make an appointment to visit his Oxfordshire studio and view his wildlife sculptures, you can reach him on +44 (0) 7971 028 098

Hamish has a substantial range of bronze sculptures for sale, and sculptures in other materials, all of which are listed on this website. If you see something you like that is labelled as sold out, please get in touch with Hamish directly to discuss a private commission.