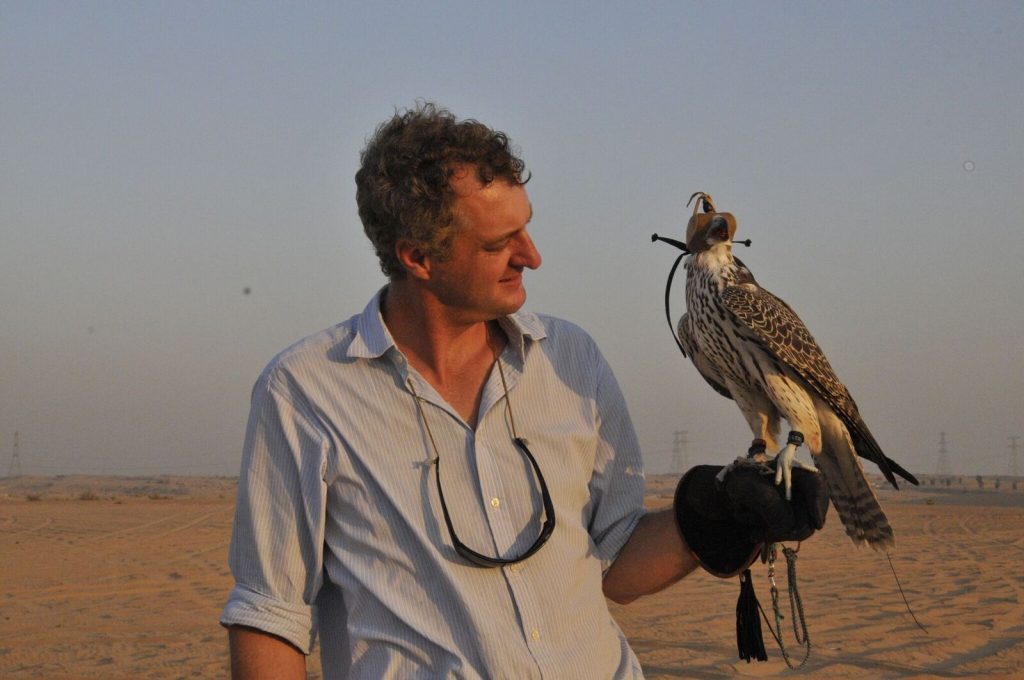 My recent research trip to the United Arab Emirates was a great opportunity to sculpt a variety of animals. In my last post I told you about visits I made to a camel breeding program and a saluki kennels that inspired me to begin some new sculptures. 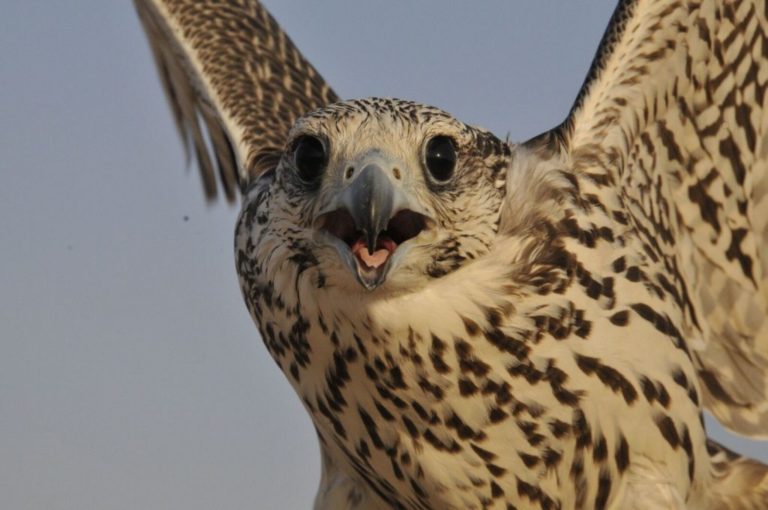 I was also mad keen to spend time watching some falconry and get up close to these magnificent birds. Falconry has been a part of desert life for thousands of years. It was originally a practical necessity for the Bedouin to add meat to their basic diet. Dates, milk and bread were supplemented with an occasional rabbit. Saker, Peregrine and Gyr falcons are used for hunting and celebrated in this traditional ancient sport that is revered throughout the region. “Through practising falconry, we recall our authentic Arab traditions and hold onto our old values and morals.” (The late Sheikh Zayed bin Sultan Al Nahyan quoted at Falcons of Arabia exhibition in the DIFC District, Dubai.)

I am planning 3 new sculptures of falcons, inspired by my visit. One is a monumental head and the second is a life size dynamic bird in flight. The third will be a stylised falcon which I hope will leave the viewer questioning whether it is ancient or modern. In a land so steeped in tradition and ancient culture, which paradoxically has also become a hub for cutting edge contemporary art, it seems entirely the right approach to take. 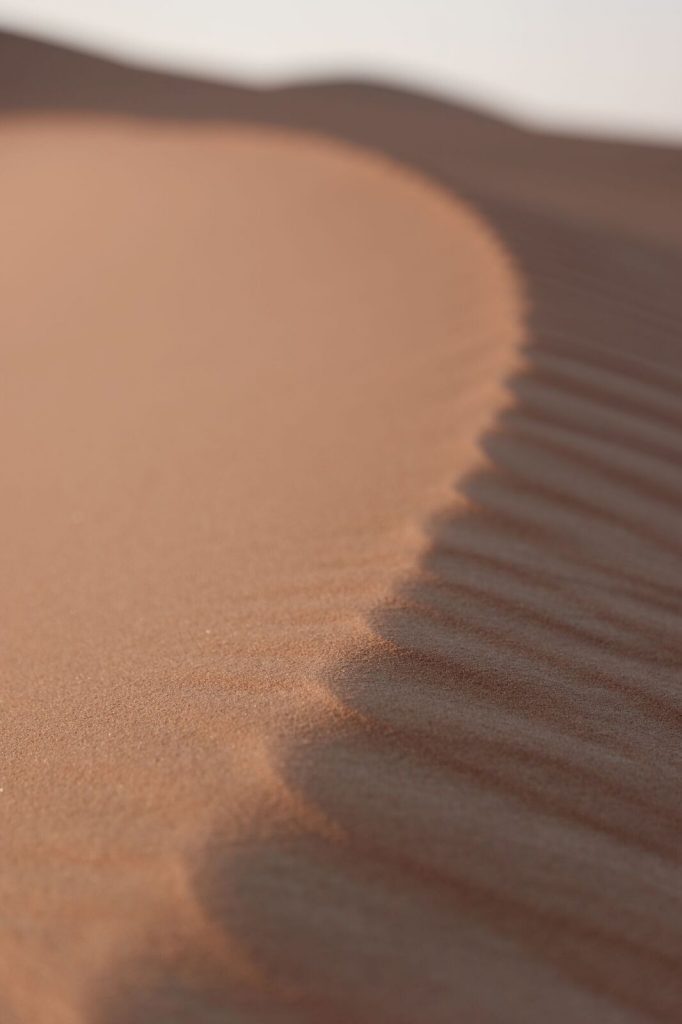 I couldn’t go to the UAE without venturing into the desert. The Liwa Crescent lies 220km south-west of Abu Dhabi on the northern edge of the Rub’ Al Khali Desert, also known as the Empty Quarter. I travelled in a convoy of 4×4 vehicles and spent two nights sleeping under the stars. With no light pollution to reduce visibility, the views of the night sky were spectacular. Drifting off to sleep under a canopy of brilliant stars was an extraordinary experience. It made me feel incredibly humble and small in the face of the vast universe around me, while at the same time inextricably connected to it all. 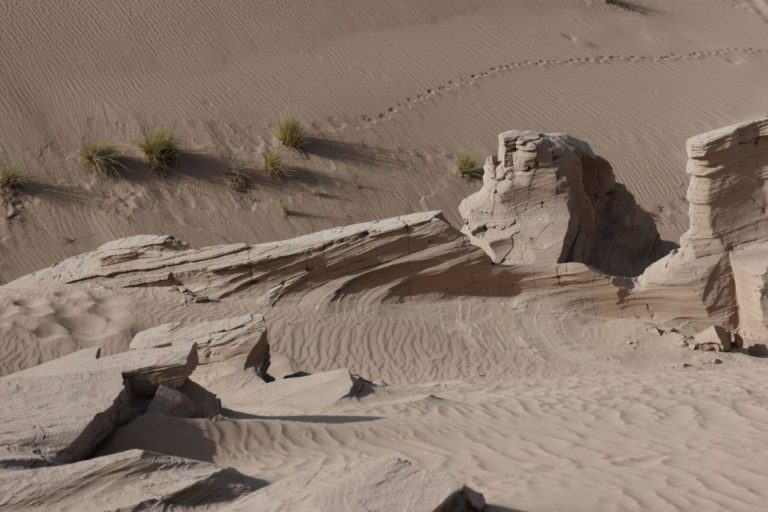 We drove from Arada in the east to Hamim in the west, through much the same area that the travel writer Sir Wilfred Patrick Thesiger explored in the 1940s. His inspiring book Arabian Sands recounts his adventures by camel and on foot through the Empty Quarter. Unlike him, we were travelling in motor vehicles and using some pretty advanced satellite tracking technology to navigate our way, but we still managed to have our own moments of drama! We got stuck in the sand a couple of times and getting out involved the use of snatch ropes and lots of digging in the heat of the blazing sun.

After leaving Hamim, we drove south. We came across some Emiratis who had got their vehicle well and truly wedged in the sand. Although we got their car out of the bowl and rescued them, we managed to de-rim one of our tyres in the process. We spent an awful lot of time scratching our heads and trying to figure out how to fix it! Eventually, we hit upon the idea of lying it flat, flooding the rim with shampoo and then using a compressor to re-inflate it! 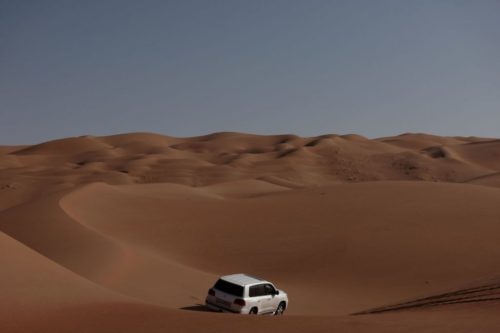 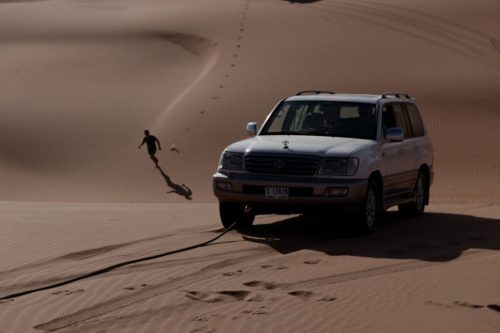 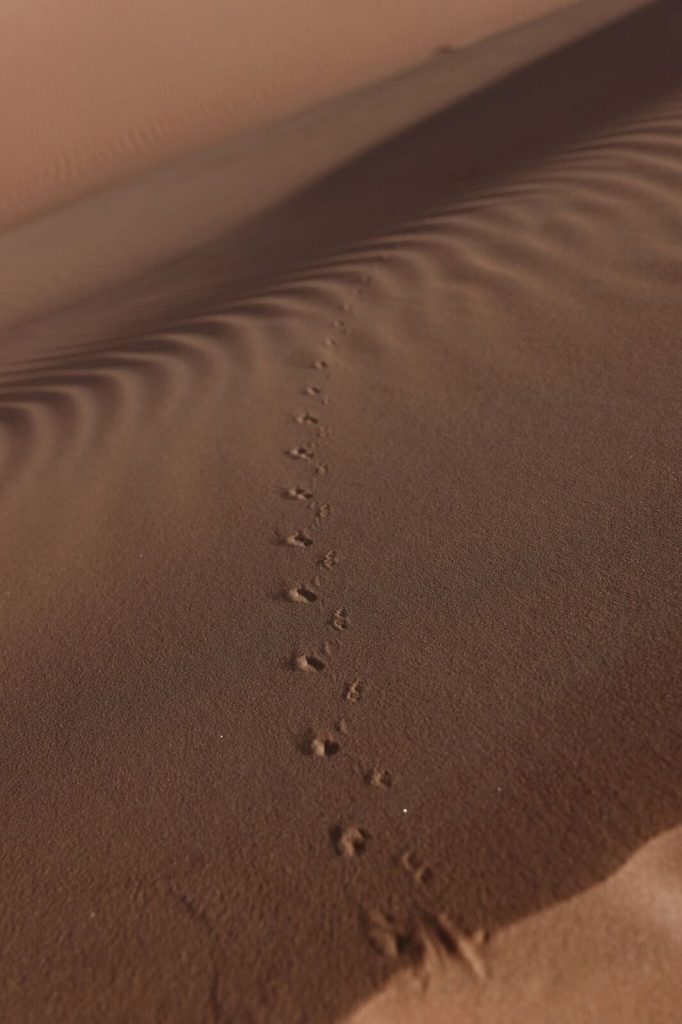 I thoroughly enjoyed my adventures in the desert. One of my favourite moments was an early morning walk at sunrise. I woke wet from the dew and walked for a bit to dry in the morning sunshine. I was intrigued by the fascinating shapes of the dunes, the sand blown into beautiful formations by the desert winds. It was amazing to see so many footprints all over the sands. Animals had been going about their business while we slept. I tracked spoor from insects, lizards, a fox and some sort of cat, and many from Arabian gazelle. I saw a desert rat, closely related to a gerbil. All before helping to cook breakfast over the fire.

These research trips are always exciting, because one stumbles across the unexpected. These chance encounters can provide new and inspiring ideas for my work. Seeing Arabian gazelles in the wild was particularly thrilling. I have always wanted to sculpt these beautiful animals. I’ve started work on a group of three running up a dune. 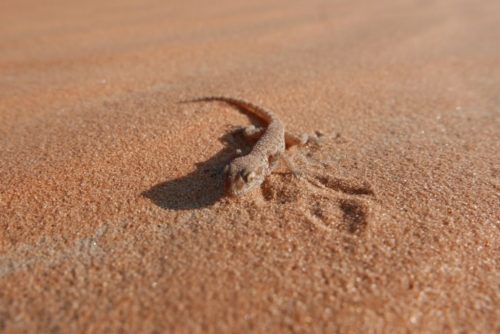 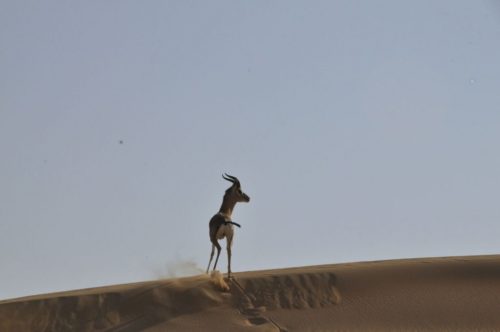 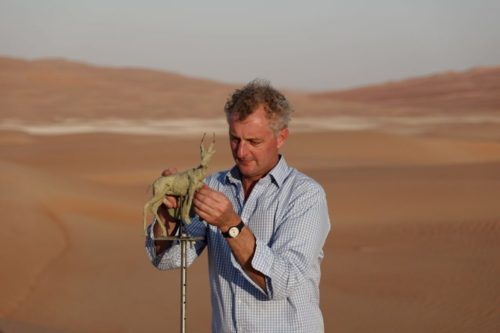 Back at home in the Cotswolds, we are madly busy finishing up the sales from my recent exhibition. I’ve been at the foundry, boxing up sculptures to send out in time for Christmas. We’ve used hundreds of rolls of sellotape!  I can’t wait to get back in my studio to finish the sculptures I started in the UAE.  New ones include a camel head, saluki, falcons and Arabian gazelles. And I want to make a start on my little desert rat.

Wishing you all a Happy Christmas and Merry New Year!

If you would like to discuss a commission with Hamish for a wildlife sculpture or any other limited edition bronze or silver sculpture, check out the Commissions Page for more information or ring 01608 737859. 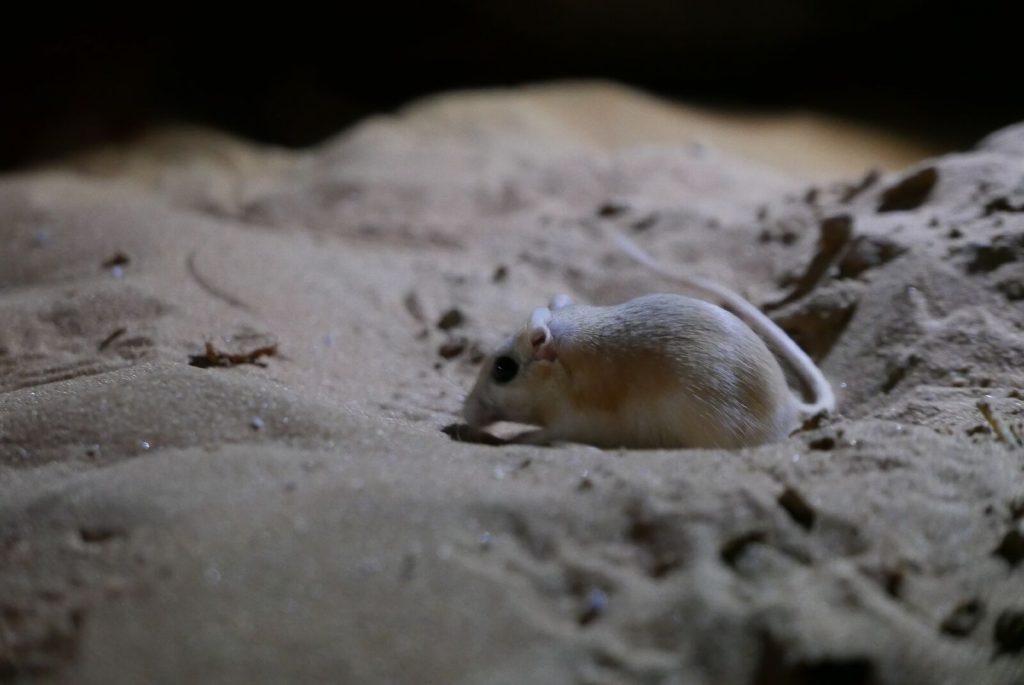 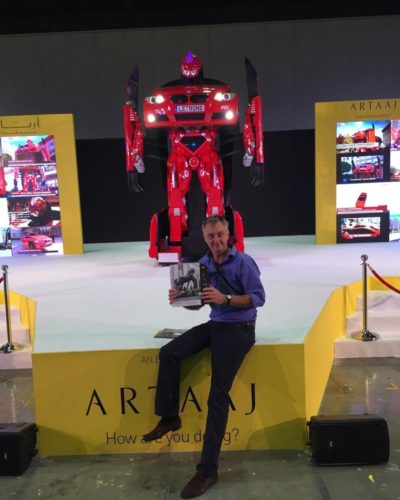 Research trip to the United Arab Emirates – Camels and Salukis

I've just come back from a week long research trip to the UAE and have fallen in love with this amazing place! It has spectacular landscapes, fascinating wildlife and warm, friendly people. It was an informative and very memorable trip to a part of the world I didn't know terribly well beforehand. 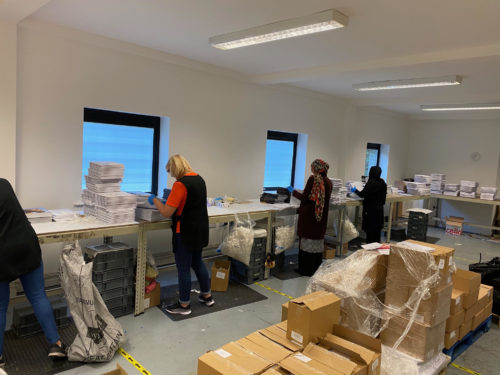 As a sculptor, I usually have a major solo exhibition every three years. However, things haven't gone exactly to plan. Last year, I delayed my exhibition due to Brexit, and this year I cancelled it due to Covid! Of course, it was extremely disappointing. '

2016 was a busy year here at Hamish Mackie Sculpture.